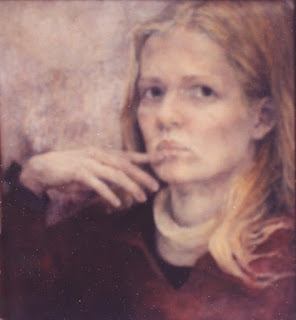 My sister was many things. A galaxy of ideas. An exultation of creativity. The radiance of hope. And now, the source of all sorrow.

Posted by Cheryl and Janet Snell at 7:50 PM

When I first encountered Janet’s paintings a decade ago, I was instantly attracted to and impressed by their luminous strangeness. Expressive and evocative, those images became a permanent source of aesthetic sanctuary for me. Janet, two years my junior, is someone I wish I’d met and someone whose death floats in my imagination with a peculiar anguish.

Cheryl and Janet Snell
Cheryl Snell's books include poetry and fiction, most recently the novel Bombay Trilogy. She has been nominated seven times for the Pushcart Prize and Best of the Net anthologies. She has had work included in a Sundress Best of the Net Anthology, and other anthologies and journals. In addition to Cheryl's traditionally published titles, she and her sister Janet collaborated on chapbooks for Scattered Light Library. Janet Snell was a graduate of MICA and showed her work widely in venues such as The Drawing Center in NYC and Strathmore Hall in DC. She wrote FLYTRAP, a winner in the Cleveland University Poetry Center's competition, and won the Lopside Press Chapbook Prize for PRISONER'S DILEMMA, art and poetry on game theory. The sisters' book GEOMETRIES, was published by Moria Books, and Janet's collection of oil pastels and drawings, TWICE TOLD TALES, was published by Poet's Haven. Janet died in 2020.

Where You'll Find Us

Cheryl Snell has woven a compelling story; a page-turner that is emotionally rich without being predictable.

Throughout the book, I found myself trying to imagine being Nela, the main character, and wondered what decisions I would have made given her circumstances. Ultimately, the difficulty I had in imagining myself in her capable shoes gave me great respect for the decisions she made/directions she chose...and I am still thinking about them days afterwards. Though Nela is highly intelligent (a scientist) and independent - the kind of person who could quite easily spend life alone - she is not impervious to love's inexplicable ways, which gives her a delightful charm. Strong women everywhere will applaud and root for her.

Some paintings are quiet vortexes. I don’t mean depictions of spiraling maelstroms. Rather, some paintings are an implicit swirling and blending of the emotional into the metaphysical. That vortical energy opens a different space or zone of experience for the onlooker. Painters who can do this are sort of like magicians, aren’t they?

Life is such a hectic, loud, nervous affair. Ten-thousand thoughts at once always colliding, hollering in our heads, eventually prompting some vague action. We’ll then do this or that as modes of defense against the hectoring of time.

Normality gets to have too much say; science gets to claim every-freaking-thing. But a long time ago, the conventional tree science of monkeyism turned into something stranger. Human consciousness and later Shakespeare. Something new and weird bubbled off the surface of being — the pure energy of metaphysical silence potential in floating heads. That dark energy creates eccentric space. The residue of dreams flits there, as pieces of alternate being. The gravity of imagination there warps mirrors of the obvious. Contours of discrete things — especially ourselves — become equivocal, liquid, mad with metaphysics.

Some artists are able to paint that zone of Great Silence, wherein time gets trapped and stunned into colorful shapes of enigma. Something in us, I hypothesize, requires enigma.

I detect certain motifs recurring or threads running through Snell’s work: the familial, the traumatic, the feminist. Yet her paintings also uncover and convey more universal themes. The same fabric realizes tableaux of ancient psychological moods brushed as modern visions. I get wondrously lost, for peculiar duration, in the Great Silence of these paintings.

The poems by Cheryl Snell in PRISONER'S DILEMMA are like psychological novels compressed into exquisite lines. This is free verse on a high level -- what is being said flows with a calm, artistic cadence. What is being said probes depths with a subtlety and with the ring of lived experience.

The art by Janet Snell is some of the finest contemporary work I've come across. I'm partial to black-and-white, and these works are deftly realized, surreal, and evocative. They are haunting.

How wonderful the complementary nature of this volume! Poem and painting suggestive of each other -- a complex of emotion and vision, of deep observation and expression.

The Blend of Visual and Written Art

THAT FEEL is one of the finest collaborative books published by the sisters Snell. Cheryl Snell is a fine poet and her sister Janet Snell is a fine expressionist artist. In their previous books there was often the question of whether Janet was illustrating Cheryl's poetry or if perhaps each artist made her art and then combined it in the most suitable manner.

Now it is obvious that the art that spreads across both sides of an open book is unified and equally involved in the nidus of expression. The poems and art of THAT FEEL seem to be more visceral than those that came before them - these are poems from the gut, art about alienation and longing and rapturous moments that fade too quickly (or were they even there?). For example in the combined expression of the following, the painting accompanying the poem is that of two faces distorted by reflection in glass or mirror or memory:

Each brush stroke had been its own allegory and could not reconcile the break. I felt for connection in blind corridors, whispering Who's there? from within the room's glass eye. Maybe I was dreaming. The facts were hard to parse and sometimes lied. I did, too,confused by what my reflection showed. The glass distorted it and the fissure widened from a thin red line. It splintered our embrace and

again I was alone.

The book may be brief but it is a powerful one. The only criticism about this latest opus is the somewhat disjointed feeling of the varying fonts or typefaces the artists used. Those wide variations of print diminish the tone of the poetry/art like unwanted audience distracters. But that is a minor complaint in a book that further substantiates the excellent collaborative efforts of the sisters Snell. --Grady Harp

Prisoner's Dilemma:...The diction here, precise and yet off-hand, coupled with the unexpected coupling of ideas (beauty – rivers – the girl who knows all the boys desire her) places Snell on intimate relations with the main currents of twentieth century American poetry, a landscape marked by masters such as John Ashberry, Mark Strand, Louise Bogan and Louise Gluck, to name but a few poets associated with the style Alan Williamson (himself a fine poet) dubbed the new American surrealism. And yet Snell—or rather the Snells—for the book I am reviewing, The Prisoner’s Dilemma, is a collection that alternates between Cheryl’s short lyric poems and Janet’s pencil drawings -- stands apart.

The difference is hard to explain, so lets be blunt: in the best of Cheryl’s work, the style regains its vigor, enlivened by the poet’s deep sense of what it means to be caught up in life. A digression on Freud may help here because we are on the subject of digressions. Freud could never stop being fascinated by the notion that it is life that is the interruption. Not death. The immortal is the natural state. But somehow we find ourselves shunted and routed out of the immortal and into the detour of the mortal for a brief go round before flowing back into the immortal, back into death, and the beyond of death. Cheryl Snell’s poetry, and Janet’s art, together illuminate this insight: that the detour into life is a circular whirlpool. --Matthew Biberman

It could be the case that those human heads are floating in a paradoxical space: yes, obviously human (and all that that signals to us) but also pure moments of form. Cephalic shapes to circumscribe color-vacuums, lending force to the other “objects.”Another impression jumps into my own head, beyond what I said above about...well, whatever it was I said. For me, I feel like I'm looking at a negative-image of consciousness. The subconscious? Maybe. And what's weird and cool is that those heads, drained of color and feature detail, seem to express more human soulfulness and depth than even a portrait by Rembrandt!...Tim Buck

There is something of Keats's “negative capability” revealed in this poignant story: it is a mystery to me how a female author can so perfectly inhabit the hurting corners of a middle-aged man's soul. And her striking turns of phrase bring delight to the reader, even as he squirms and winces in sympathy with Roger...Tim Buck

The imagery is often stark and reminiscent of Sylvia Plath, the emotion bottled which, unstoppered, pervades an air of vaguely fragrant stoicism. Where the subtext is menacing, it frets away at a blithe surface like a sliver of glass stuck in the weave. But, often, it's uncompromising, violent, in-your-face, leaving the reader with no more than the merest scintilla of hope...Rosy Cole

...This is a collection of poems to be lingered over, like reminders of first views or experiences we usually keep to ourselves for fear that speaking of them will make them lost to us. Snell has captured these moments and we can only hope she will continue to write such tender thoughts as well as in MULTIVERSE. ---Grady Harp

This is not poetry merely to beguile the imagination; it is experience by vital proxy, full of pulse and texture and radiance. Memento Mori is a tour de force. (R.Cole)

"... Both Snells' (author and painter) works soar in this lovely book. It was interesting to watch the movement of fear between the poems...A nervous and wonderful collection of art fused with poetry."--Andrew Demcak, on Multiverse

"A series of charcoal drawings that go darkly anywhere via an expressionism that reminds me of Egon Schiele and Francis Bacon. Snell provides poems for her illustrations that generally extend rather than just rephrase them-- ."

... varied and beautifully imaged lyric narratives...Again, she stuns us with her imagery.---Comstock Review